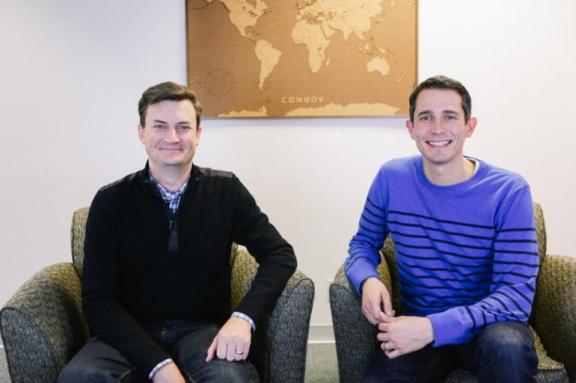 Called The 'Uber For Trucks,' Convoy Raises $62M To Fend Off Uber Itself

It's been known by the short-hand of "Uber for trucking" over its short two years of operation, but now startup Convoy has the funding to pose a serious threat to Uber's own freight business ever getting off the ground.

With Uber Freight up and running and other startup rivals raising large sums of their own, Convoy is announcing one of the biggest funding rounds to date for a trucking player: $62 million in a Series B round led by Y Combinator's Continuity Fund, the fund's first investment in a company that's not an alumni of the famed accelerator program. The raise also includes VC firm Mosaic Partners and billionaires Barry Diller and Bill Gates.

Based in Seattle in the shadow of ecommerce and logistics giant Amazon, Convoy has built out a network of 10,000 trucking companies that connect with shipments from 300 corporations including Anheuser-Busch and Unilever, its app helping each side link up to send thousands of shipments each week, accounting for what Convoy says is already millions in sales. From the get-go, the business had the eye of luminaries such as early investors Jeff Bezos, Marc Benioff, Pierre Omidyar and Henry Kravis, as well as Reid Hoffman through VC firm Greylock Partners, which led a $15 million Series A in the business in March 2016.

"The problem we are solving is that the industry itself is massive, but it's completely fragmented," says cofounder and CEO Dan Lewis. "For them to look at this and say, 'that makes sense,' is a testament to what we're doing."

But despite its early traction and a valuation now estimated in the hundreds of millions, Convoy's operating in a hyper-competitive and still-emerging category in tech. Uber launched its own service just in May, offering truck companies an Uber-hailing like load-matching system right from the source. Transfix, another challenger, raised $42 million of its own from top VC firm NEA at its own reported multi-hundred million valuation earlier in July.

They're all taking on paper and mom-and-pop players that Lewis says haven't faced major change in decades. Convoy says the market in trucking is about $800 billion, with the vast majority of that spread out among one million small businesses averaging just three trucks. For Lewis, a former student deliveryman and logistical consultant who worked as a general manager at Amazon before starting the business with Grant Goodale, Convoy can increase a business' capacity by matching it with more delivery loads, tracking where trucks are on the road and helping with payments afterward. A typical broker charges 20% or more, Lewis says; "Convoy charges similar or a little less but plans for prices to drop significantly over time."