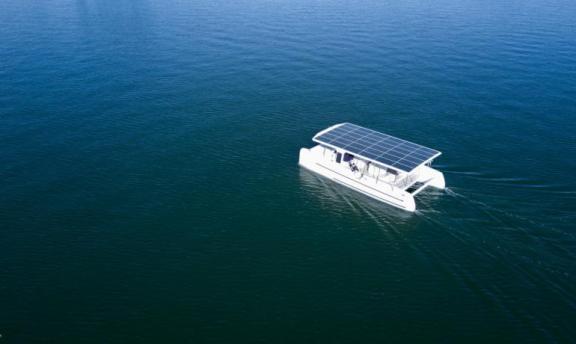 The Tesla of solar electric yachts launches in New Zealand

The future of boating is electric – and silent. That’s what Dutch company Soel Yachts says, and they’re bringing electric travel to the seas with their SoelCat 12. Inhabitat covered the boat’s design last year, and now the company is launching their sustainably-powered yacht in New Zealand. The yacht is kind to the environment not simply in the reduction of carbon dioxide emissions, but in the reduction of noise pollution as well.

The SoelCat 12, which was built in New Zealand, is powered by the sun. Soel Yachts describes the boat as the ‘Tesla on the water,’ noting while cars are transitioning over to being powered by electricity, the same movement largely hasn’t occurred in boating. They want to revolutionize the boating industry, and are debuting the SoelCat 12, designed in partnership with Naval DC, in Auckland, New Zealand this week.

The company says it wasn’t enough to just stick an electric motor on a boat. They kept electric propulsion in mind as they designed the SoelCat 12, evidenced for example in the highly efficient lines of the hull. Traveling at a speed of eight knots, the yacht can run simply on battery power for six hours. Reducing the speed to six knots, the boat can travel for 24 hours – even at night when the yacht’s solar panels aren’t harvesting energy. The boat’s systems can be monitored on a phone or tablet, allowing boaters to see their energy use as in a Tesla, according to Soel Yachts.